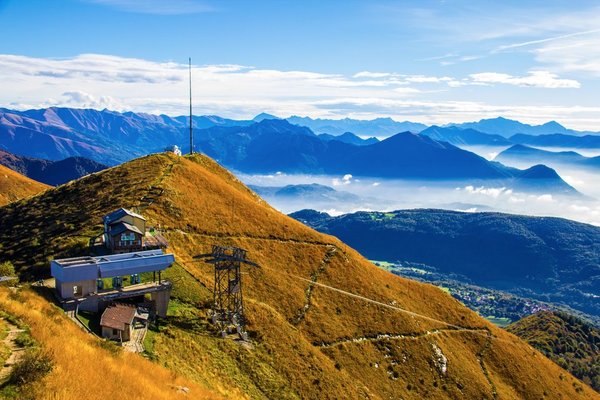 Being the second biggest lake in Italy, Lago Maggiore  takes pride in providing astonishing views, crystal clear water, and gorgeous nature. As Stendhal once said, "If you had a heart and a shirt, you would sell your shirt and visit Lago Maggiore."  Why not take it as your call to action?

Located on the border between Switzerland and Italy, Lake Maggiore is both Swiss and Italian. The locals are used to divide it into two parts as well: the upper and lower lakes. Although 80% of Lake Maggiore is situated in the lush Italian regions of Lombardy and Piedmont, the Swiss part is just as picturesque.

9. Lake Maggiore Has An Inhabited Island

Isola dei Pescatori, or the Island of Fishermen, is a part of the Borromeo Isles. It has a population of 50 people and two hotels, but what it is famous for are of course, fish restaurants. This could be a paradise for cats, but you won't see any of them on the streets; ironically, cat figurines and magnets are quite popular souvenirs.
Lake Maggiore

8. Lago Maggiore Was Originally Named After A Plant

Lago Maggiore had another name – Verbano. During Medieval time when people first settled here, they noticed the shores of the lake covered in blossoming bushes of verbena, rhododendron, and camellia flowers. Nowadays, it is still a place with a unique soft climate, where travelers can witness the flowers in bloom all year round.

The astonishing beauty of Lago Maggiore could melt even the most ruthless emperors' heart. In the beginning of the 19th century, Napoleon Bonaparte, on his way to Italy, ordered the building of a road through the lake due to its strategic position. According to legend, he claimed he had never seen such beauty and wanted to have access to this “wellspring of happiness.”

One of the lake towns, Stresa, has a pretty delicious attraction on offer. Le Margheritine di Stresa Cookies is a unique dessert created in the 19th century by a local cook to please, Margherita of Savoy, the future Queen of Italy. Now you can find the royal delicatessen in almost any coffee shop and bakery in town.
Lago Maggiore cookie brand

5. Lago Maggiore Has A Unique Climate

It is obvious for Italian speakers that the name of the lake reflects the peculiarity of the climate. The lake is constantly blown by the winds that are replacing one another: Maggiore from the North, and Mergozzo from the West. The water level changes significantly with the seasons, which prevents Lake Maggiore from freezing, even in the coldest of winters.

4. Lago Maggiore Is Perfect For A Big Catch

Trouts, pikes, perches, lobsters – the list goes on. To say the crystal clear water of Lago Maggiore is full of fish is to say nothing, and of course, it massively affects  local cuisine. Make sure to try local delicatessen's: Grigliata Mista (fish stuffed with arugula and basil) and Granseola (spider crab meat with lemon and oil).

3. Lago Maggiore Is Immortalized In A Novel

Earnest Hemingway, was a keen traveler, and a big fan of Lake Maggiore and the region. In his novel, “Farewell to Arms,” the main character, Frederic Henry, together with his lover, Catherine Barkley, runs away from Italy, crossing the lake on a boat towards the Swiss border.
Lago Maggiore Biography

To avoid paying taxes for his Bugatti, Swiss architect, Marco Schmucklerski, drowned it in Lago Maggiore. The car was, however, connected with a chain to the shore so that after the tax audit, it could be dragged back out again. It never happened: the chain was corroded and the car drowned. The Bugatti was rediscovered in 1967 by a diver, and was an underwater attraction for 50 years until it was lifted from the bottom and sold on a car exhibition in 2010.
Bugatti

1. Lago Maggiore Was A Hot Spot For Aristocrats

In the 16th century, the Borromeo family bought most of the land around Lago Maggiore. Today, they still own most of it.
Borromo
Protected from the cold winds by the Alps, Lago  Maggiore with its pleasant climate, transparent water, and breathtaking views is truly a place you will never want to leave.

Monte Lema - Monte Tamaro
One of the most beautiful hikes in the whole pre-alpine region. The amazing panoramic views from this ridge cover Lake Maggiore, the Centovalli, the Maggia Valley, the Verzasca Valley and Locarno to Bellinzona to the north and Lugano and its valleys and lake to the south, with the Alps, with Monte Rosa and the Matterhorn, providing an awe-inspiring backdrop.
Lago Delio
A short walk through idillic area along lake Delio offers fantastic views over mountains and lake Maggiore. A drive to the lake might take some time but it is worth the effort and the time.
5
Like this article Liked. Thank you!