share
by Marie-Berdine Steyn
Avid Traveler 25
IT, Basilicate, Matera
02 Oct 2019
0 2
The secrets entombed in the old monuments and buildings in a place linked to the myths and legends of yore, is enough to give one the goosebumps. Now, imagine getting a chance to visit such a place!
Yes, Matera in Italy is just that, famous for its (stone houses carved out of caves and cliffs), that hold secret the mysteries handed down from generation to generation.
It is thus no surprise that this city, located in the southern region of Italy called Basilicata, is linked to many a myths and legend; it has after all been in existence since the Neolithic Era. (If UNESCO reports are to be believed.)
Once called the ‘shame of Italy’ due to the extreme poverty and poor living conditions of its citizens, it has now become one of the cities in Italy, most worth a visit.
Let’s explore the many secrets attached to Matera: 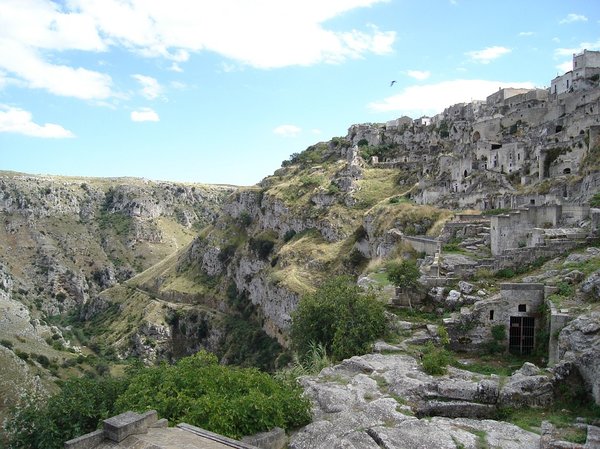 It is a wonder how people in ancient times thought of settling down in a canyon that had been carved into caves and niches by the eroding action of River Gravina. There are some 1,500 cave dwellings that honeycomb the flanks of this steep ravine. But the people of that time had not only carved out the relatively soft tufa stone, a type of limestone, to make their dwellings, they also excavated the already existing caves into churches that today number over 150.

A short visit will tell you that the white walls and niches of the dwellings and caves, that appear pockmarked and asymmetrical, have an eerie setting. It is here that the early inhabitants practiced Paganism, the magical pagan rites that people indulged in for their personal betterment and to conquer the forces of nature.
This secret initiation rites have imparted a mystical aura to the city since ancient times, resulting from the myriad myths and legends, that echoes in its caves, crypts and cisterns till date. You have to visit it to feel it.

The church complex of  consisting of four carved out churches that hold the crypts, provides one with an eerie feeling as to the fantastic thought that went into its creation. Visitors gape in awe at the beauty of its domes, decorated with equilateral crosses. (This was the symbol associated with the Order of the Knights Templar.)
Seeing it, you cannot help but get a haunted feeling of anguish. It is as if you can hear the screams of these fearsome and battle-hardened knights, as they suffered at the hands of King Philip IV of France, when the Holy Land was lost in the Crusades.

Another belief that survives to this day can be found within the Church of Purgatory. It showcases the theme of death, fashionable in 1747, with the belief that: and, '’  This belief is augmented by carvings of skeletons, skulls and angels with flames enveloping repentant souls inside the church.

The date when the Crypt of Saint Eligio came into existence in the Sassi is uncertain, but since that time Saint Eligio, the patron saint of domestic animals, continue to be revered by the locals. The legendary powers of Saint Eligio were said to bless and protect  animals. Since time immemorial, on Saint Eligio’s feast day, December 1st of each year, peasants, shepherds and herdsmen would bring their mules, horses and other animals at the crack of dawn to have them blessed by making them circle around a column with his statue. Even today, local farmers throng the crypt on December 1st to receive the saint’s protection and blessing for their animals.

Another curious feature of Matera is the Barbarian Cemetery that inspired Carlo Levi, an Italian-Jewish painter, writer, activist, anti-fascist and doctor, who is best known for his book,(Christ Stopped at Eboli), to write about the horrendous living conditions in Matera. This prompted Levi to describe it as, ‘the dead are on top of the living,’ because the hollowed-out rocks above served as tombs for the dead, while people in those times lived in the caves below. (This has also been the site for the remains of a Bronze Age settlement.)

The Complex (Rock Church of St. Nicholas the Ofra) can be found close to Matera's Murgia Park.  This collection of four-level caves is connected via tunnels (and often ladders), facing the Gravina, with San Nicola Ofra (a chapel) located on the 2nd level.  It was used in ancient times as a monastery, but later as a sheep stable.
The crumbling edifice of the ancient San Nicola all Ofra dwellings, seem to tell its own tale about the shepherds who built them and the arduous life they lived there. The houses are actually made of stone and are carved out of the limestone cliffs, locally known as “Sassi.”  Legend has it that the shepherds of Matera built the entire complex to keep themselves and their sheep warm and to prevent them from escaping during the severe winters of the region.

Residents were later moved to modern dwellings built by the government, but the legacy still remains for all to see. Just standing at any of the four levels of caves, will stun you into silence as you begin to imagine the secrets and myths that this place has to offer.

The Crypt of Original Sin

Inhabited since the Paleolithic and Neolithic eras, The Crypt of Original Sin is a cave where monks began to live during the 9th Century, A.D. It is one of the odd 1,500 caves that were used as dwellings for poverty-stricken Italians in Matera, which earned the locality the name of, “Shame of Italy.”

The walls are adorned with biblical paintings, and those of an anonymous painter have resulted in him being called ,“The Painter of Flowers of Matera,” after the red flowers that were used to adorn the art.

As it was part of the region known as the “Shame of Italy,” this cave was neglected by the government and unknown to the public until recent years. However, all this changed with the discovery of these caves by students in 1963, who restored the paintings and cleared the area of lichens and moss with the support of the Zètema Foundation, and the Italian Central Institute of Restoration. The cave was finally made available to the public in 2005.

The Modern City by Adriano Olivetti

Although the name Olivetti is associated with typewriters throughout the world, it would surprise you to know that this was not the only thing that he was renowned for.  Adriano Olivetti was a man of vision and has the distinction of having transformed the sleepy town of Ivrea into a teeming metropolis,  called, “The Modern City by Adriano Olivetti.”

The new buildings in Ivrea were no more than four storeys, and designed to be aesthetically appealing by world-renowned architects. Another unique point is Olivetti’s glass-walled factory. Olivetti meant for factory workers to be able to see the mountains as they worked, and be able to see what was going on outside the factory.

The factory was built to accommodate community centers, parks and green spaces, with playgrounds for children, auditoriums and all amenities for workers of a modern community. The city underwent a transformation with the addition of a ring road and new bridges.

Olivetti was a man with a vision and the way he effected the transformation of Ivrea is unique. Many countries across the world followed his example for the development of their industrial cities and towns. Although, with the advent of computers and the Internet age, the Olivetti factory and the town of Ivrea suffered decline, this planned city is a place where you can revisit a city that was built by a visionary and a man with a heart who successfully harmonized man and machine through his modern city.

The Matera region has scanty rainfall, which is the reason a unique rainwater harvesting system was installed, called “Palombaro.” This water system is unique to this particular location.

(It can be considered as the forerunner of the modern rainwater harvesting systems that are in place today throughout the world.)

Noted historian and chronicler, Eustacio Verricelli, in 1595, waxed eloquent about the water system in Matera. In short, he praised the town as being: "”

This he stated, with particular reference to the unique system of water collection channels, tunnels and aqueducts which collected rainwater that flowed from the hills to service the town with water.
The rainwater harvesting system at Matera which was used until the early 1900s, consists of a network of channels and gutters carved into the roofs. This led to the “Palombaro Lungo” which is a massive 5 million liter underground cistern. It is this cistern which is considered one of the largest in the world that has put Matera and the Sassi area on the map by UNESCO as a World Heritage Site.

Travelers who visit the nearby Lake San Guiliano,  will come across a curious sight – the fossilized remains of the bones of a whale found in the lake that date back to over a million years ago. (From the Plio-Pleistocene period.) During this age, the entire region is believed to have been covered by sea.

The bones are displayed today in the local museum in the oasis area of Lake San Guiliano. The exhibit is quite unique due to the fact that it is exceptionally well preserved. Quite an achievement for a skeleton of 15 meters in length!

In Conclusion
As someone rightly said about Sassi, “What you see on the surface is only 30 percent. The other 70 percent is hidden.” What it hides, if myths and legends are to be believed, are some dark secrets that are yet to see the light of the day. Watch this space!

Do you know of any other Secrets, Myths & Legends tucked away in Matera?

Let us know in the comments below. We would love to hear from you.