On Terminology: Elevation vs. Altitude vs. Prominence

share
by Svetlana Shele
Traveler 1
18 Aug 2017
0 0
A peak or not a peak? That is a baffling question when you come up to a large bolder that somewhat stands out from the surrounding terrain and seems singular enough to be called something special. Or, when you are moving along the ridge of a mountain and can definitely feel a rise under your tired feet, is it just an unevenness of the surface or another summit that you conquer without being aware of the fact?
This article was actually inspired by two such phenomena: Corno Nero aka Schwarzhorn with merely 42m prominence, and Mont Blanc de Courmayeur with just 18m prominence from col major. The latter is 625m southeast from the very top of Mont Blanc and causes much confusion in identifying the highest point in Italy. 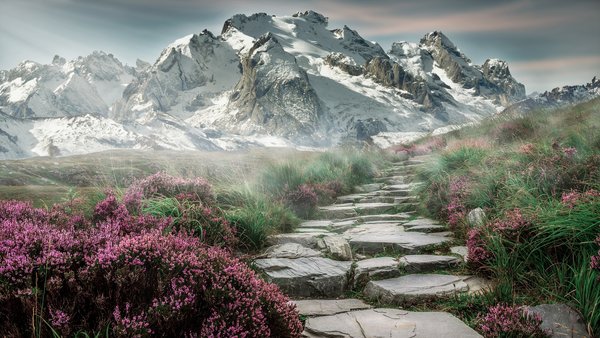 Elevation per se is a topographical height of a geographical location above or below a point of reference, the mean sea level being the most common one.  In big words, elevation is most commonly a reference geoid, a mathematical model of the Earth's sea level as an equipotential gravitational surface.
Elevation is oftentimes confused with altitude, which is used for measurement ABOVE the surface, usually a hard one. Elevation, or geometric height, is mainly used when referring to points ON the Earth's surface, thus it is mainly used in geography. Whereas altitude, or geopotential height, is used for points above the surface, such as an aircraft in flight or a spacecraft in orbit, and the term ‘depth’ is used for points below the surface, therefore astronomy and aviation would more commonly use the term ‘altitude’, not elevation.
If you want to go deep, explore some caves in Europe 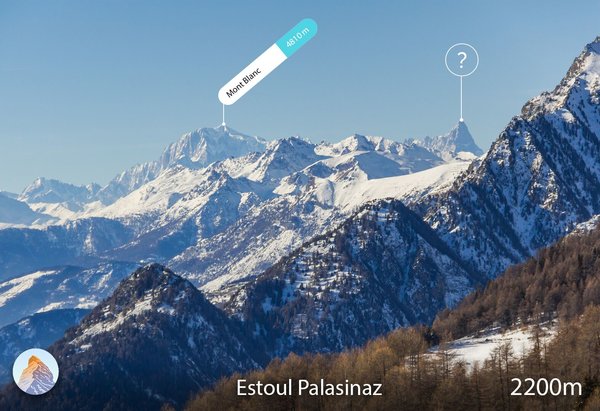 If we go deeper in the elevation vs. altitude dilemma, it is worth mentioning that we don’t have an elevation meter, the device used for measuring vertical distances above the sea level is called altimeter, as it measures the air pressure around it. And the measurement you get is called the indicated altitude. The PeakVisor app is using this tool to identify your altitude position in the mountains and to show you where else you can get should you wish to go higher.
In mountaineering, we also speak of high altitudes (not elevations) for heights above 2,400m (8,000ft). The most high-altitude point on Earth is Mount Everest, in the Himalayan mountain range on the border of Nepal and the Chinese region of Tibet. Mount Everest is 8,850 meters (29,035 feet) tall. The urban area of El Alto, Bolivia, is the most high-altitude city on Earth. All 1.2 million residents live about 4,150 meters (13,615 feet) above sea level.

There is a classification of high-altitude mountains according to their elevation: 4K and 8K peaks (four-thousanders and eight-thousanders) according to metric-system tradition and thirteeners and fourteeners if you are living in a British Imperial foot-measurement system.
There are 14 independent eight-thousanders: Everest, K2, Kangchenjunga, Lhotse, Makalu, Cho Oyu, Dhaulagiri I, Manaslu, Nanga Parbat, Annapurna I, Gasherbrum I&II, Broad Peak, and Shishapangma. All of them are in the Himalayas and their elevation ranges from 8,027m to 8,848m.
As for the 4K mountains, among the plethora of the deadly peaks, my favourites are in the Alps: the majestic Mont Blanc, the hazardous Matterhorn, the girlishly-inconsistent Jungfrau, and the haughty Eiger. Some 4Ks even have two names! Some of them were used as James Bond film locations.

Altitude as a Major Challenge to Climbers 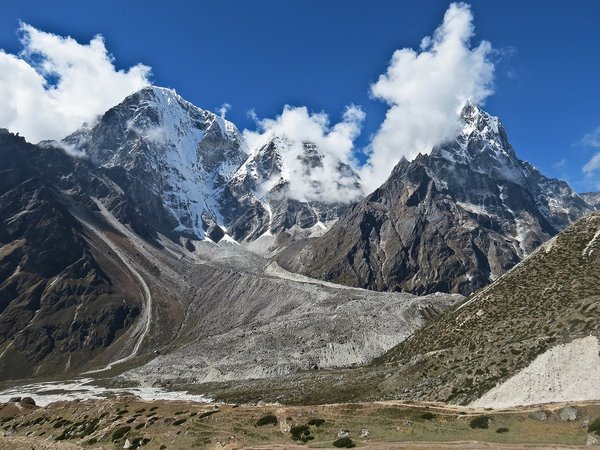 However alluring elevation is, the margin of safety is razor-thin on a mountain like Mount Everest. Some hazards, such as thundering avalanches, freak storms, and hidden crevasses are beyond a climber's control. However, many deaths and near-death experiences are the results of human errors brought about or compounded by the effects of high altitude. Climbers are vulnerable to altitude sickness once they climb above 2,400m (8,000ft). The region above 7,600 meters (25,000ft) is called the death zone. Climbers who venture into this zone cannot escape the potentially deadly effects of oxygen deprivation; they can only attempt to minimize and control what breathing the thin air at high altitudes does to their bodies. The first effect a climber will notice upon reaching higher altitudes is an increased breathing rate. Any exertion, even eating a meal or crawling into a sleeping bag, leaves climbers short of breath.
Climber and filmmaker David Breashears has described climbing at such altitudes, even with bottled oxygen, as equivalent to "running on a treadmill and breathing through a straw."

Prominence as the Relative Elevation

Prominence is the elevation of the mountain in relation to the terrain encircling it. It characterizes the height of either a mountain or a hill by the vertical height or distance between it and the lowest neighbouring terrain. It is also the difference in height between a mountain and the highest saddle which links the summit to the highest terrain. It is, therefore, the lowest height which one is required to descend in order to re-ascend to a higher peak. Unlike the actual elevation of a summit, prominence is the relative elevation of a summit.

Conceptually, it is easier to understand prominence if we imagine that we can raise and lower the sea level at will. At a certain elevation, any mountain range could be made to be its own sea-island. By extension, at a certain elevation, every summit would become the highest point of its own island.

In mountaineering, prominence tells you how alluring the peak is because it will imply the higher the prominence, the more likely it is to offer incredible views.
The issue of identifying the prominence stems from one particular question that baffles many climbers: what constitutes a separate peak? Some seemingly innocuous peaks even have several names, being not very high or prominent at that. In the US, for example, the generally accepted criterion for inclusion on peak lists is 300' of prominence. The 300' rule (sometimes referred to as the Colorado rule) is based on the 1950s survey of 14,000' mountains in Colorado published by the U.S.G.S.
It allows objectifying the lists of the highest mountains, which have been around for at least 100 years. Such lists used to have a classic shortcoming as they did not answer the question how a mountain qualified for inclusion on the list. In the absence of a qualifying rule, one might say that the earth's ten highest mountains are ten rocky outcrops on the Mt. Everest summit block. A list of high mountains must either employ a minimum prominence as a criterion or be based on a subjective sensibility as to what constitutes a separate peak (such as limiting entries to named peaks only). A comprehensive index of prominence lists worldwide can be found on the website www.peaklist.org 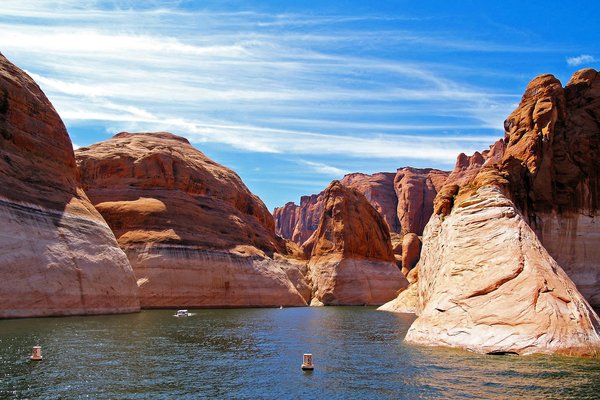 Two types of prominence exist, the wet and dry prominence. Wet prominence considers areas of permanent water, snow, and ice features. Dry prominence ignores water bodies, snow, and ice features. Dry prominence assumes that the earth is defined by the solid bottom of those features. Dry and wet prominences are equal unless the summit is the highest point of a landmass or an island. The dry prominence is useful in measuring the submerged seamounts.
There is also an issue of calculating prominence. To measure it, you must know the elevation of a summit and the elevation of its key col. A problem arises when one or both of these elevations are not known precisely. Most commonly, col elevations are not given on topographic maps, so all that is known is a range based on a contour interval. Many summits also are represented by just a closed contour and no exact elevation.
There are three ways to deal with this uncertainty when calculating prominence: 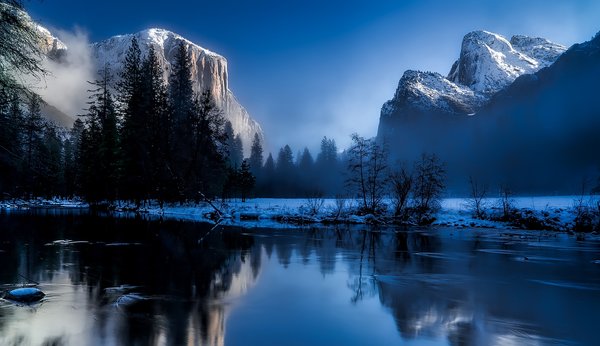 Just the feeling of isolation as it is. Photo Credit: tpsdave

Isolation for any given summit is defined as the distance from that summit to the nearest higher land. This distance is usually given in miles or kilometres, and represents the radius of the area where the peak is the highest point. The concept is easy to grasp with some examples. The isolation for Mt. Everest is undefined or infinite, since there is no nearest higher land--but every other summit can be assigned an isolation value. After Mt. Everest, the peak with the highest isolation is Aconcagua, with a value of 10,257 miles to the nearest higher land in Afghanistan. For K2, the isolation is 818 miles, the distance to a point near Mt. Everest.
There are a few quirks to using this method as a measuring tool for mountains. Low hills that are highpoints of isolated mid-oceanic islands will often have abnormally high isolation values, since there is no land at all (higher or not) nearby. The highest peak on Tristan da Cunha in the mid-Atlantic is not on many lists of the world’s most significant summits, but it ranks about No.16 in the world in isolation. For this reason, in some isolation lists on this site small island high points are excluded from rankings. 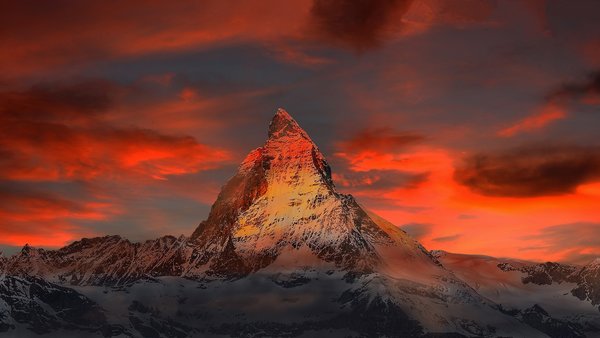 The notorious Matterhorn by klausdie

Compared to prominence, isolation rewards summits that may be very low but that dominate a large area. For example, Eagle Mountain in Minnesota and Magazine Mountain in Arkansas both have isolation values that make them seem much more impressive than prominence ever would.
In 2017, researcher Andrew Kirmse created software that calculated the isolation distance for virtually every summit on earth, based on digital terrain models. With his help, the vast majority of peaks in the Peakbagger.com database now have a reasonably accurate true isolation value.
0
Like this article Liked. Thank you!