share
by Marie-Berdine Steyn
Avid Traveler 25
30 Nov 2018
0 2
Mount Kenya, the second highest mountain in Africa (just after Kilimanjaro), and the
highest mountain in Kenya is a mountain carved through ancient volcanic activity, owering above the Kenyan landscape surrounding it. It is no wonder that this extinct volcano with its glacial valleys and snow-capped peaks is today considered one of the best tourist destinations in Africa.

Mount Kenya boasts a plethora of fauna and flora, which attracts a wide array of species. It is furthermore listed as a world heritage site by UNESCO

The ideal time to visit Mount Kenya is between January and March. (This is the dry season - perfect for trekking and hiking.)

Mount Kenya received its name from European missionaries who ironically heard one thing and wrote down something else. (The irony of translation I guess.)
The Story:
The first missionaries who settled in Kamba Land (Kenya), John Rebmann and
Johann Ludwig Krapf, found the mountain stunningly beautiful and inquired from the
locals as well as the Akamba traders, (travelling with them as guides at the time), as
to what the mountain was called. The Akamba traders then told them the mountain is
known as, 'Kiima Kya Kenia,' or, ‘the glittering mountain.’ The missionaries ironically
recorded it as Mount Kenya.
Other Names:
The word, ‘Kenya,’ is derived from a local dialect called Kamba, who pronounces
‘Kenya’ as, ‘Kinyaa.’

Other ethnic groups such as the Kikuyu, called the mountain, Kirinyaga, or, ‘the
mountain with ostriches.’

The Maasai community calls it, Ol Donyo Eibor, or, ‘the white mountain.’ 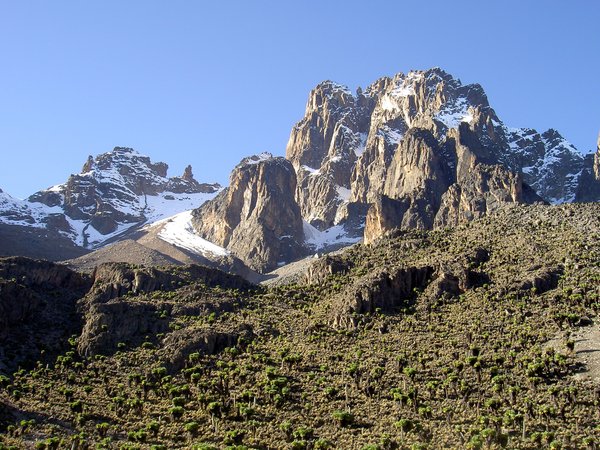 Over 4 million years ago, various successive volcanic eruptions helped form Mount Kenya to what it looks like today - a large mammoth of glacial valleys and volcanic debris buried deep beneath the surface in most areas. Interestingly enough were experts able to trace ice particles as far below as 3,000m through analysis of curved ridges and boulders, as well as stones carried by glaciers down the mountain.

Mount Kenya is currently dormant; however, it was formerly a stratovolcano, which is a tall, conical type volcano, said to mostly be composed of one-layer hardened lava, tephra and volcanic ash, (Source: Science Daily)  and active during the Pleo-Pleistocene period.
Interesting Fact: The original crater that developed here, was formed well over 6,000 m above sea level. (Higher than Mount Kilimanjaro.) 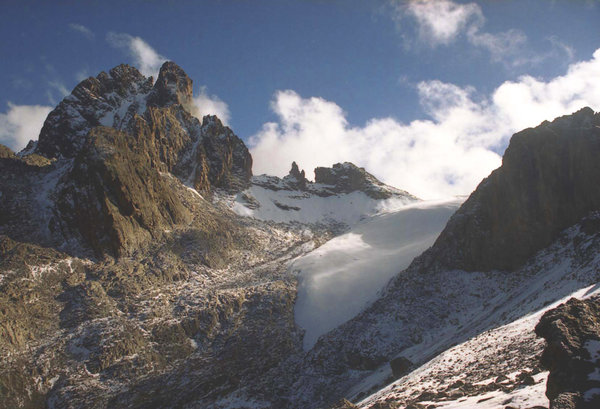 The Lewis glacier is the largest on Mount Kenya. Photo credit by Josski

Since it became extinct, there were two major galactic periods depicted by two main
moraine rings of glaciers. These eroded the mountain to its current height of 5,199 m.

One aspects visitors will notice immediately is how the glaciers of Mount Kenya appear as
huge white ice mounds. These mounds have inspired naming of some local beer brands.

Way up in the mountain is U-shaped moorlands, created by glaciations. The circular hills on the steep sides are the remains of plugged vents, and the remainder of the mountain is symmetrical because of a central plug system.

Ascending to a height of 5,199 m above sea level, Mount Kenya can seem a daunting
challenge to many a visitor. However, this is not always the situation since almost all of the peaks have been summited. Most of these include rock climbing through the easiest routes, though beware, some areas still require walking or scrambling through thigh undergrowth or natural hindrances.

The highest peak that can be summited without climbing is Lenana Point, at 4,985 m.
(Over 15,000 tourists visit the Mount Kenya National Park to climb this peak.) The
other two peaks, Batian and Nelion, have been ascended by only approximately 200
people in history.

Visitors wishing to climb Mount Kenya will find it not that difficult to reach the mountain since it can be found at a central point – that is, it is located 12 miles off the equator.
The northern summer rock routes are perfect in the months of January to March; this
is the dry season. (As well the ice routes.)

Climbing the mountain during the rainy season is unfavourable.

Trekking Mount Kenya alone is not permitted, summiting the mountain as a group is
recommended. Moreover, you should be equipped with paraphernalia required for
mountain climbing should you wish to reach the higher, more difficult peaks.

Accommodation at, or close to Mount Kenya caters to the most basic to luxurious:

There are eight routes to summiting Mount Kenya.

The most frequently used routes are Chogoria, Sirimon and Naro Moru. The other routes require visitors to request permission from the Kenya Wildlife Service.

A route called so after the town it leads to, Chogoria Town. It is 32 kilometres (20 miles) from the forest gate of Mount Kenya National Park.
How to complete: The Route can be completed via a vehicle for those desiring a quick trip; however, it is possible to walk to the summit as well.
To see: There is much wildlife to be seen: monkeys, leopards and possibly even the giants of the forest, elephants.
Route Condition: The terrain and road is although not in good condition, therefore, visitors are advised to be careful when walking or driving.
Duration: Hiking through this route can take at most a day or two depending on the hikers' preference.

The longest route to access Mount Kenya’s peaks is via following the Nyamindi River. (Although beware, it is restricted in some situations, example, during heavy rainfall. It will be best to inquire if the route is open during the day of your visit.)

A common route, taken by trekkers with the aim of reaching Point Lenana.
Duration: Visitors can ascend to the point in three (3) days. (Most make use of bunkhouses along the route in each camp, therefore no need to carry a tent.)
Route Condition: The terrain is good for the most part, with the exception of difficult terrain from Vertical Bog Section.

This route starts at Gathiuru, and follows North Burguret River. It is the shortest route to
Point Lenana, and is managed by the Gathiuru Community Forest Association.
How-to: To access the mountain, visitors will have to go through Mt Kenya Royal Cottages, for payments and facilitation. This is a lodge located opposite the Nanyuki airstrip.
To see: The route boasts of a wide array of fauna and flora, wildlife and exquisite scenery.

The National Park's gate is 10 kilometres along the track. Visitors are thus able to access the route via a four-wheel drive or by walking.

(This is a quick route for tourist who wants to summit Point Lenana quickly.)

Among the restricted routes. It starts at Timau Village, closer to Sirimon Route, and follows around the edge of the forest, leading to the highest point.
Route Condition: Previously it was possible to drive, but currently the road is in terrible condition.

Is a route situated 10 kilometres from the main peak, with an aspect of gain and loss of over 2,000 m as you climb.
Route Duration: The route can be walked in a day, however, for panoramic views of all the phenomenal scenery, do consider a more lengthily stay for photography, which can then take two or three days to complete the route.
Skill: The route does not require any technical climbing skills.

The right clothing is as always paramount to ‘survive’ hiking in Mount Kenya. (As in any other mountain climbing or hiking situation.)
Recommended:
The most essential item is an outer jacket since temperatures do fluctuate on Mount Kenya, making it difficult to function without protection from the cold.
(It is recommended that visitors not take fitted clothing, because that will affect circulation, causing extreme discomfort as the hike progresses.)

Taking pictures with an automated camera is essential when hiking or trekking Mount Kenya.

Remember to take an extra battery when going to high altitude areas, since extreme cold may affect the performance of electronic components. Keep your camera close at all times.

It is vital to note that you could spend more than two days on the mountain, therefore take enough clothing, especially socks and gloves to prevent frostbite. After packing your items, wrap them with a plastic paper to prevent them from getting wet in the mountainous area.

Mental strength and stability are key to achieving any objective. Summiting Mount Kenya is easy if you have the right mindset. Mountaineers should have a positive mindset and understand that climbing or hiking any mountain can hold danger. Always focus on the main objectives and do not let other aspects deter you from achieving your goal.

While climbing, take one step at a time until you find a rhythm. When descending, follow the same technique to avoid injuries and by descending in a sideways fashion by placing one foot before the other.

Dehydration is a common feature in trekking and hiking, therefore ensure you have taken enough water to cushion such effects.

Skiing on Mount Kenya is prohibited.

Interesting Fact: Although, in 1935 the idea of a skiing championship on Mount Kenya was mooted by P. Anson and Bill Delap.

Apart from Mount Kenya are there other attractive ranges and mountains in Kenya.  These include:

There is a myth believed by ethnic communities that the appearance of blue-white snow was considered as the presence of God and that eruptions occurred because people had disobeyed Him, then considered to have lived on Mount Kenya.  Any death on the mountain is considered as a sign of God’s wrath on disobedience.

However, the volcano has been inactive for decades now.

Several communities who live around Mount Kenya and Kikuyu, live on the western and southern sides. This is an agriculturalist community, and they believe that God, Mwene Nyaga, lived on Mount Kenya after he descended from the sky.

The community believes that the mountain is the throne of God on earth, and is a place where their founding father, Gikuyu, went to meet God.

Interesting To Know: According to the Kikuyu records, Gikuyu was the first person on earth to summit Mount Kenya.

Mwene Nyaga then also translates to, ‘owner of the striped one,’and, Nyaga, ‘ostrich.’ This is a symbol of God’s habitation. God is viewed as the owner of the rare bird.

The Embu people inhabited the southeastern part of the mountain. They believe that Mount Kenya is the home of God, or whom they call, Mwene Njeru. The mountain is therefore considered a sacred place.

Interesting To Know: The Embu built the doors of their houses facing the mountain. The same aspect applies to neighbour communities Mbeere, Meruand Akamba.

The Ameru people live on the north, east and northwestern slopes of Mount Kenya.
Murungu, (the name of the Ameru’s God), came from the sky and settled on Mount Kenya. The Ameru further describe the mountain as a mountain with white features.

The Maasai people of Kenya are nomads. They used to graze their cattle around Mount Kenya since the grass did not dry. They believed that God showered the grass from the top of the mountain.

A common Maasai prayer is:
“God bless our children to be like an olive tree on Mount Kenya, so that they may expand and grow like the hills of Mount Kenya.”

To make the most of your trip to Mount Kenya, install the below two apps to conveniently take photo routes and measure the height for peaks in the surrounding area.

Happy travels,
The Routes.Tips Team
2
Like this article Liked. Thank you!