In ancient times, Luxor was the capital of Egypt during the New Kingdom (16th century BC – 11th century BC), the greatest city in Thebes, the magnificent city of god Amun-Ra, the religious and military capital of the nation. In fact, Greek poet Homer praised it in his Illiad:

“Royal Thebes, Egyptian treasure house of countless wealth, who boasts her hundred gates, through each of which, with horse and car, two hundred warriors march.”

Today it is known as the world’s greatest open-air museum and tour guides in Egypt will not let you forget that.

While Cairo offers the visitor the Pyramids, Luxor probably has more to boast.  From the Valley of the Kings (home to the famous Tutankhamun) to the Luxor temple, travel aficionados can feast till their bellies burst.

The East Bank is more ‘modern’ than the West; it is where most bazaars and hotels are located. Conversely, it is the West Bank that has the ancient Egyptian sites – the Valley of the Kings and the Valley of the Queens, among others.

Here are some of the top sites to visit in Luxor: 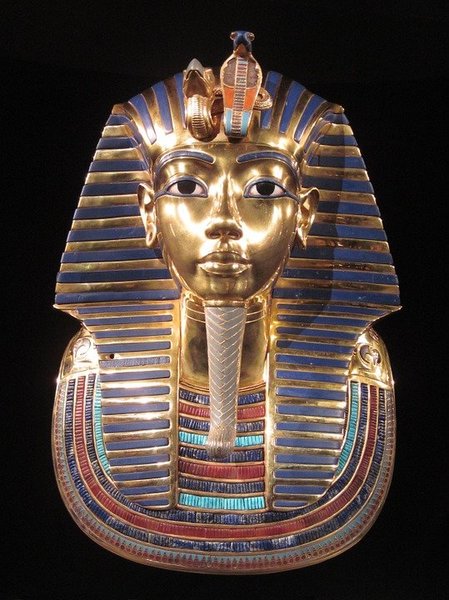 The Luxor Museum
Located on the East Bank, the Luxor Museum is one of Egypt’s best. (Although it is small compared to its sister in Cairo.)

Most exhibits are from the local Thebes area, and date from the Old Kingdom right up to the Islamic Period. The two most well-known exhibits are the royal mummies of Ramses I and Ahmose I.

There is also the Wall of Akhenaten that contains 283 sandstone blocks with painted reliefs. The wall was originally a part of Akhenaten’s Sun Temple at Karnak. There are further ancient Egyptian artefacts like cartouches, amulets, and tablets on display. 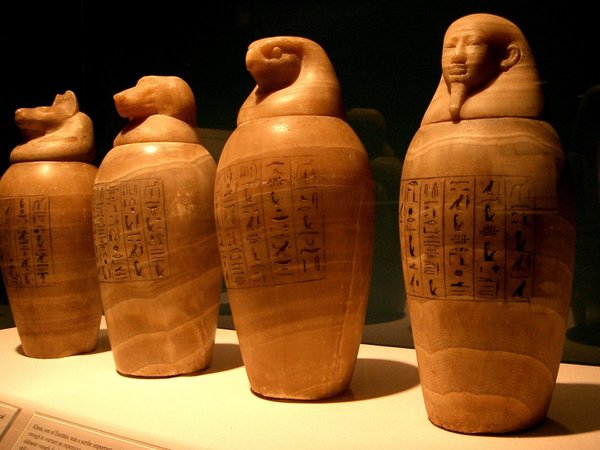 Mummification Museum
Like the name suggests, this museum is not of the regular kind. Located on the East Bank, exhibits in this small, yet fascinating museum, explains the processes behind the ancient Egyptian practice of mummification. Exhibits include both animal and human mummies and the tools and ingredients used in the process. The most well preserved mummy is that of a High priest of Amun, during the New Kingdom called Maserharti. 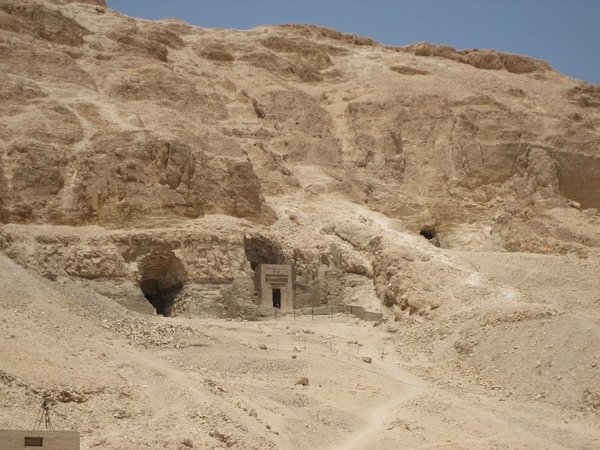 Valley of the Kings and the Valley of the Queens
Most visitors think the sites are located in the same place. In reality they are not, although they are close to each other (both on the West Bank.)

The Valley of the Kings shot to prominence as a must-see sight in Egypt after its most famous resident, the boy-king Tutankhamen, was discovered. The valley is the burial site for most pharaohs between the 18th, 19th and the 20th centuries BC. At present it houses 63 tombs, and Egyptologists say many more are yet to be discovered.

Visitors can tour any three tombs on a ticket with the tomb of ‘King Tut’ costing another E£100. Other famous tombs include those of Ramses IV, Ramses VII, Amenhotep II and Seti II. Each tomb is adorned with artwork on the ceilings and walls. 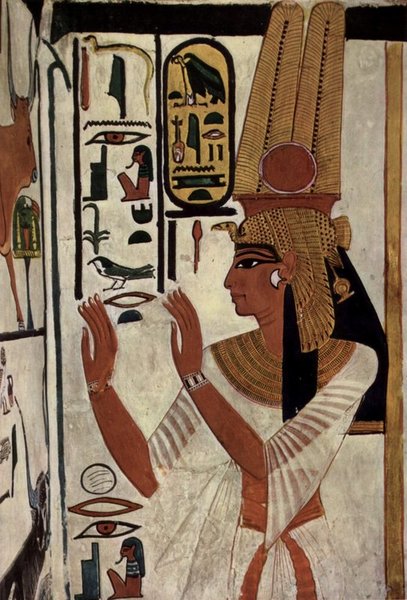 In the Valley of the Queens are buried the wives of the kings during the same time. Around 80 tombs have been excavated, most of them between 1903 and 1905 when Italian Egyptologist, Ernesto Schiaparelli, led an expedition. Unlike the splendor the kings would enjoy in the afterlife, the tombs of their wives are less grand; most of them are unfinished and with few inscriptions and reliefs.

The most famous tomb here is that of Queen Nefertiti. 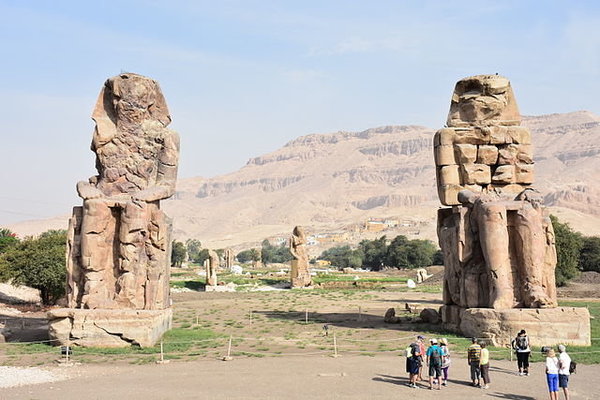 Colossi of Memnon
If you are heading from the Valley of the Queens towards the Nile (on the West Bank), you will see two gigantic statues on the side of the road. The Colossi of Memnon are carved out of sandstone and represented the pharaoh Amenhotep III seated on two thrones. (It is believed that her ruled between 1386 and 1349 BC.)

The Colossi once stood guard at the entrance to the king's temple of which a few ruins remain. The Romans took the statues to represent Memnon, the man who was killed by Achilles during the famous Trojan War.

The better preserved statue, the South Colossus, stands at 19.59 meters and it is believed to once had a crown. The North Colossus in comparison, was called the “musical statue;” visitors in ancient times believed that it emitted a musical note at sunrise. 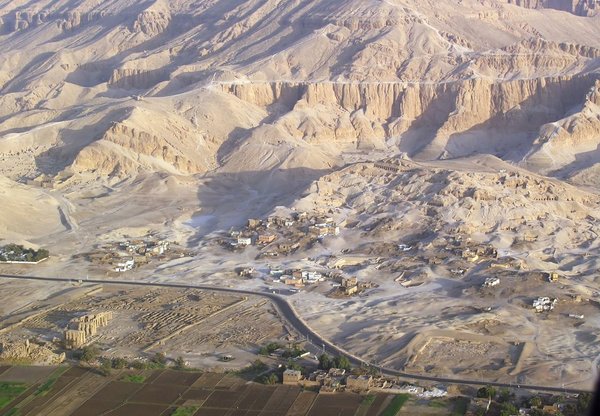 Tombs of the Nobles
Though less famed, the artwork in the Tomb of the Nobles on the West Bank might just be better preserved than the ones in the Valleys.’

The area contains around 400 tombs of nobles dating from the 6th dynasty untill the Ptolemaic era. Unlike the paintings in the tombs of the pharaohs, the ones here depict scenes from daily Egyptian life. Some of the popular tombs include those of Khonsu, Benia, Menna and Nakht. 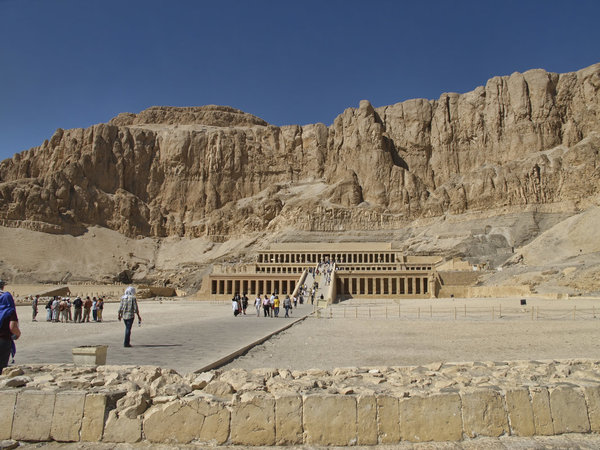 Temple of Deir al-Bahri
This temple is dedicated to Queen Hatshepsut, the first female pharaoh of Egypt, who came to the throne in 1478 BC, and is located at the foot of sheer cliffs in the desert hills on the West Bank.

The almost white sandstone temple stands out against the brown rocks behind it, almost majestically.

The complex comprises of three terraces that are linked by ramps. Colonnades border the side of each terrace.

Once inside the temple, you will notice statues, reliefs and inscriptions. You will also see how the Queen is represented to look like a male pharaoh with a beard and an apron. The temple complex is located on the West Bank. 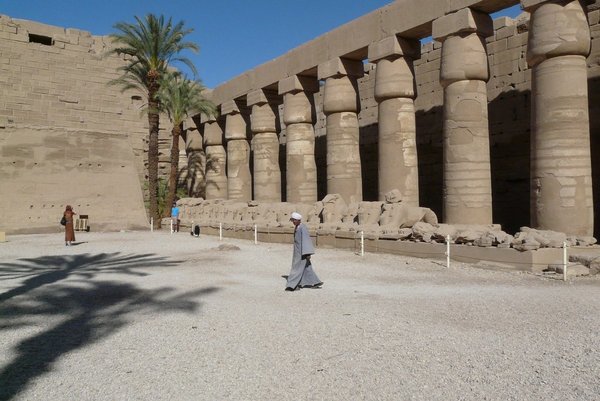 The Karnak Temple
Built over more than 1500 years with construction starting in 2055 BC, the Karnak Temple was dedicated to Amun-Ra, the King of the Gods.

The temple complex located on Luxor’s East Bank covers over 2 square kilometers and is visited by all who come to Egypt. For Egyptians living during the New Kingdom (16th century BC – 11th century BC), it was the most important place of worship.

While it is dedicated chiefly to Amun-Ra, sanctuaries and obelisks inside the complex contain inscriptions in praise of Amun’s wife Mut and son Khonsu as well. (Together all three are known as the Theban triad.)

The temple has 134 columns that are representations of palm trees; a ceiling that shows stars in the sky; the pylons symbolize mountains and the floor represents the Nile. Outside the temple is a three-kilometer long avenue with human-headed sphinxes that link this temple to the Luxor Temple.