share
by Marie-Berdine Steyn
Avid Traveler 25
Harrismith, Orange Free State, South Africa
29 Nov 2018
0 2
Upon our most recent trip to South Africa we had the pleasure of travelling through two small Free State towns known as Warden and Harrismith, situated alongside the N3 highway. It was when we traveled through Harrismith that we noticed the most beautiful peaks and hills alongside a flat mountaintop. This mountain, known as Platberg, overlooks the town of Harrismith and strongly reminds one of Table Mountain in Cape Town due to its beautiful flat-topped plateau stretching well over 9 km.

It is rare gems like these which make traveling around South Africa so exhilarating.

Sometime later I found that the locals, indeed, consider Platberg to be “Table Mountain of the Free State Province,” as it is so similar to Table Mountain.

Platberg Mountain is a natural continuation of the Drakensberg Mountains and is known for its nature reserve (Platberg Reserve), which has a unique range of biodiversity. This mountain is an inselberg formation, which is defined as a single hill that projects abruptly from a level plain – in simple words, a solitary hill.

There is a wide variety of wildlife to be found in the area of Platberg Mountain, such as the eland, black wildebeest, blesbok and mountain reedbuck. The region also has several plantations of alpine timber, like Eucalyptus and Wattle.

Due to the pleasant weather of the Free State, the Platberg mountain region is a popular destination for bikers, mountain bikers, photographers, hikers and wildlife enthusiasts.
THE BEST TIME TO VISIT PLATBERG MOUNTAIN

The area in and around Platberg has its own independent ecosystem. The soil is highly absorbent to rainwater, which runs in from the sheer cliffs and kloofs in the form of streams and waterfalls. Wild animals, such as eland, blesbok, mountain reedbuck, waterbuck and fallow deer, are found in abundance, and the area is today designated as a nature reserve or game reserve, known as the Platberg Reserve.

There is a botanical garden known as the Drakensberg Botanical Garden, but today it is abandoned. The other name for this garden is the Harrismith Wildflower Garden and, although abandoned, it is still worth a visit, as a vast variety of flora are to be seen there, as well as several species of birds.

ORIGIN OF THE MOUNTAIN’S NAME

There is no special story attached to the name of this mountain; it is simply the Afrikaans words for ‘flat mountain’ (‘plat’ and ‘berg’).

Platberg Mountain is an inselberg (literally “island mountain”), which means that it is a single, stand-alone mountain in the middle of a plain. The outer layer of the mountain is made of Jurassic dolerite and lava and the lower layers are formed from the Karoo Supergroup, part of the Drakensberg Formation, which is the youngest part of the Stormberg Group.

The summit is made of igneous rock, which is a combination of amygdaloidal basaltic lava and dolerite. The soil layer is shallow, extending to a depth of 10 mm to 200 mm, situated on sheets of rocks or ridges. Some parts of the soil in the wetland area in the lower reaches, however, form layers from 300 mm to 500 mm thick.

The composition of the soil is a mix of fine sand, clay and silt, with a moderate to high proportion of organic matter.

CLIMBING OR HIKING AT PLATBERG MOUNTAIN

HOW TO CLIMB OR HIKE PLATBERG MOUNTAIN

Climbing or hiking is no rocket science. Platberg Mountain is not exceptionally high, nor are there any really steep and treacherous rock faces, so complicated mountaineering equipment is not required. However, you might need a guide to reach the top, since there are areas where the cliffs are almost vertical at the top. A guide can show you the easiest route.

The topography in the Free State is generally understood to be flat, but the area around Platberg Mountain is far from it. This assumption leads to an underestimation while planning to climb the mountain or hike in the area around it. Robust shoes, clothing and basic props like sticks and emergency supplies are essential. The route to the summit starts gradually but gets steeper and more challenging as you cross the foot of the mountain.

REFUGES OR MOUNTAIN HUTS NEARBY ON PLATBERG MOUNTAIN

OUR TOP TIPS FOR CLIMBING OR HIKING
PLATBERG MOUNTAIN 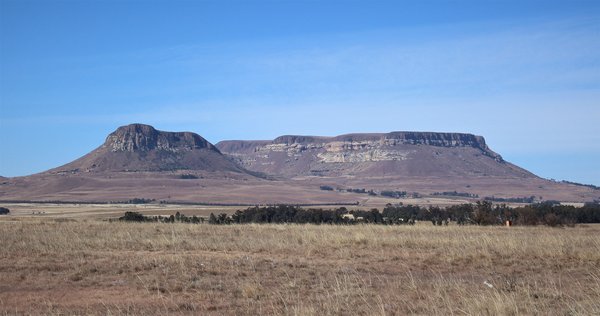 There is no skiing in this area. However, winters are cold and the minimum temperature on Platberg Mountain can be as low as -2°C. There are instances of light snow during winter, but the snow layer isn’t sufficient to allow for skiing or other snow-related winter sports.

THE TOP 3 LEGENDS AND SECRETS OF
PLATBERG MOUNTAIN

Platberg mountain is, indeed, an interesting place for visitors who are passing through. I would recommend staying overnight in Harrismith to explore the area on a day tour, then move on the next day to Sterkfontein Dam and Reserve, which is located only about 22 km from Harrismith. (Sterkfontein Dam is one of the largest dams’ in South Africa. Read more about Sterkfontein Dam here in our next blog.)

Accommodation is easily available in Harrismith and, considering the friendly locals, it’s a nice place to visit to relax for a day or two, away from the hustle and bustle of city life.

To make the most of your trip to Platberg Mountain, install the below app to conveniently measure the height of peaks and mountains in the surrounding area.